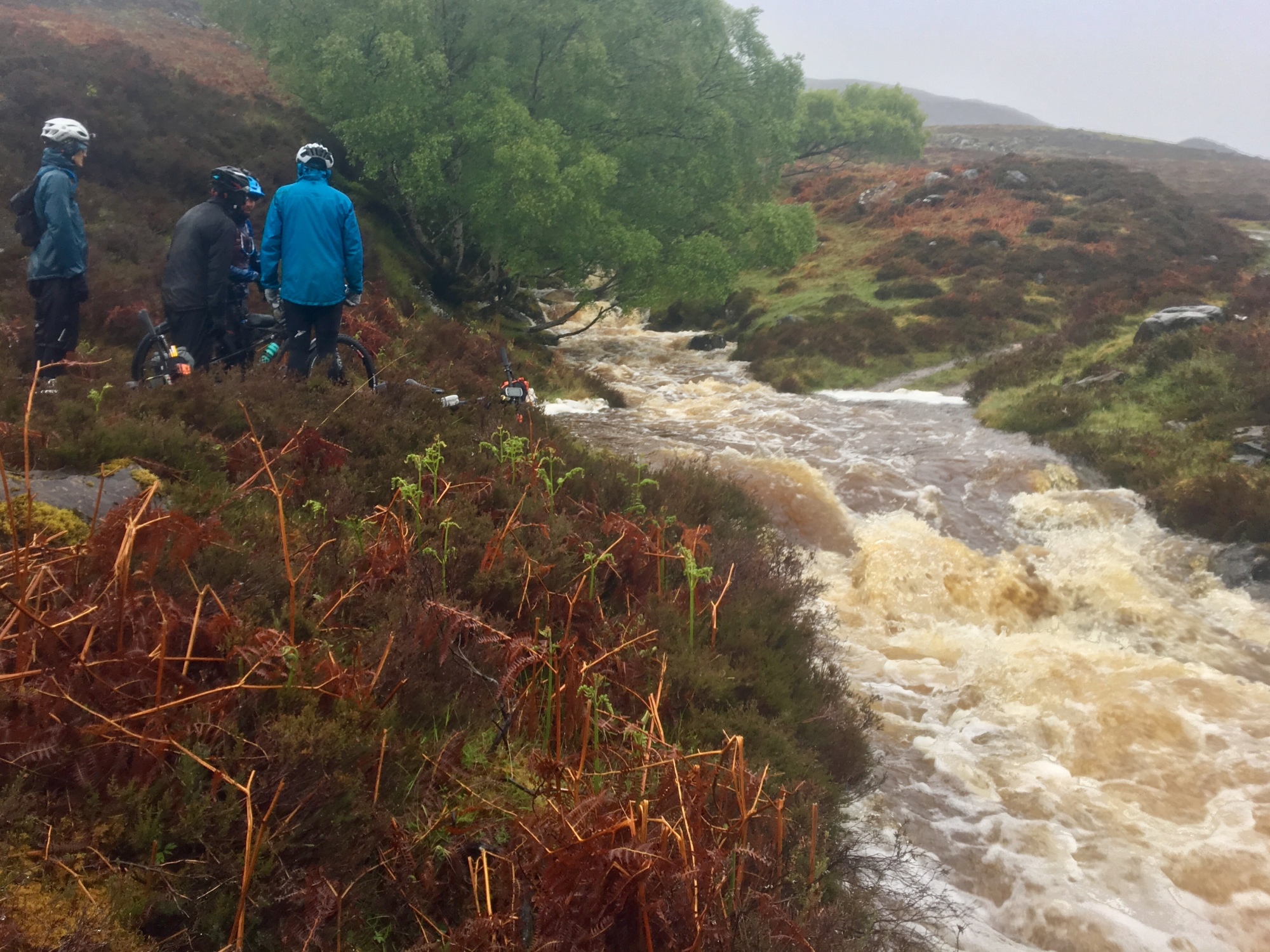 I woke up at 5am, Steve woke up shortly afterwards.  I could tell neither of us wanted to make a move.  Instead we lay there and pondered our plans for the next 24 hours.  What the weather would be like, where would be good to sleep, could we find another bothy on the northern section.  So many questions that neither of us really had an answer to.  Only thing for it was to get up and get riding.  Me, Lars and Steve got away at 6am leaving Sean Belson and some others asleep in the adjoining room at the bothy.  Within a couple of minutes we caught Martijn Boonman.  Martijn is a really nice, unassuming guy.  He’d done the Iditarod Trail Invitational 1000 mile winter race in Alaska which is a race I’m fascinated by so the Highland Trail would be a walk in the park for him. 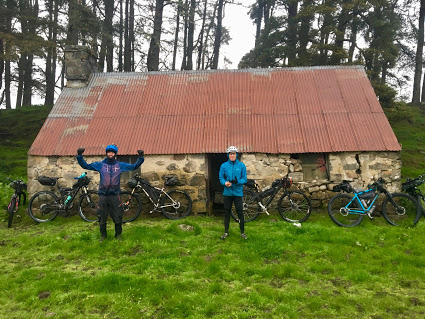 All 4 of us rode on towards Contin together.  I was looking forward to a nice warm brew and a few snacks for breakfast.  We had the track of a thousand puddles to contend with.  We joked it would just be one long puddle.  Before we even got there we found John White and Clem Shovel busily trying to work out how to cross the fast flowing river in front of them.  The river is normally a small ford, nothing to even consider when crossing, but now it was a forceful torrent ready to wash any of us down stream.  I waded in but quickly realised the current was too strong.  We wandered up and down stream trying to find a way across but nothing.  We stood there in a group and made the decision to pedal around to Contin on the road.  In my head I had already decided that once in Contin I would ride back down the track of 1000 puddles to meet the river.  I was hoping this plan would ensure that I wouldn’t be disqualified (I never did ask Alan if this would have been acceptable). 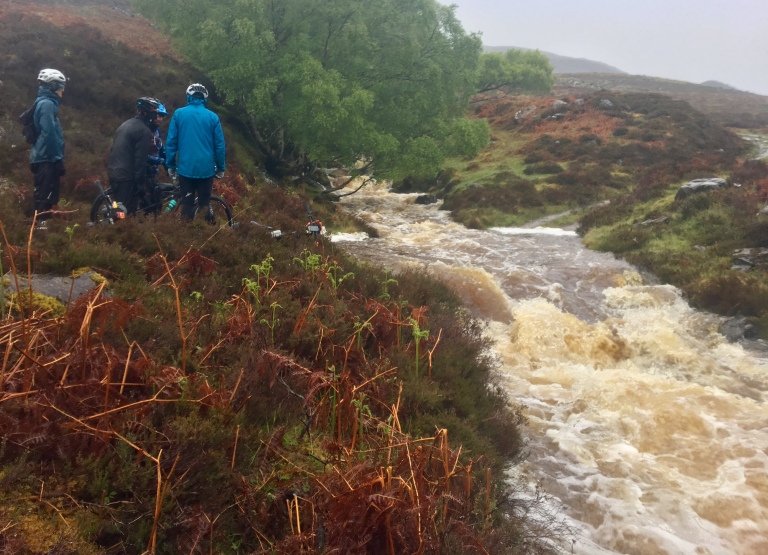 Riding along the double track back the way we came I felt a bit deflated.  I knew I could do this but variables out of my control were stopping me.  Suddenly I saw Martijn jump off his bike and start walking across the boggy tussocks.  Whilst I was moping about the river crossing I’d failed to notice the banks had burst lower down.  I quickly dashed over the tussocks and down the hill to the river.  This was our way through.  With my excitement I went to cross the first wide section.  Crickey, the current was still really strong.  A little bit further down I found my way through.  Once we all got over we had a bit of hike-a-bike to get back to the track, but we’d made it.  It was wet and miserable but I was happy.  Along the 1000 puddles everyone just pulled away from me but I’d see them again in Contin.

I arrived in Contin a few minutes after the gang.  They’d already used the drinks machine and the microwave so I had no queue to wait for.  Joys of being a bit slower.  We ate and drank most of Contin’s supplies whilst trying to dry out and get a bit warmer.  The store manager got a little stool for Steve to sit on, it was Steve sized (extra small 😊).  She also allowed him to dry his clothes in front of the heater, this was a bit too high for Steve so he had to jump to reach.  During our time in the store it became clear there was two parties emerging from the chatter.  Earlier before the crossing Steve was clearly not in the right head space.  He was leader of the sensible group, then there was the other group.  I suppose I might have been the leader of that with my Scotland poncho on (it was a strong look).  I clearly stated I was carrying on, John said he was doing whatever I did and Martijn was just happy riding. 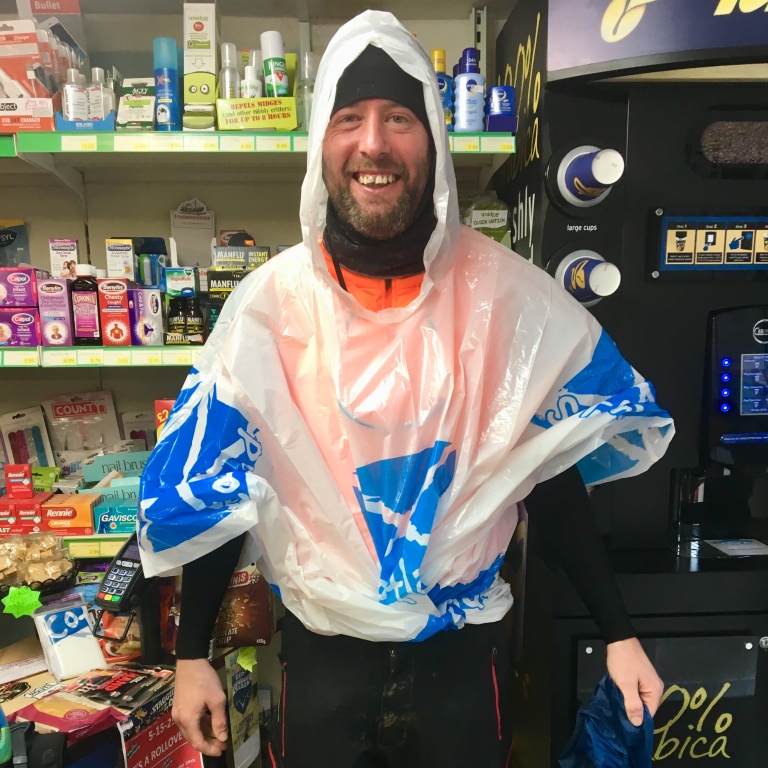 There it was, the split happened.  Me, Martijn and John waved bye to Steve, Clem, Lars and set off into the liquid sunshine sunset (well a massive rain shower on a wet Sunday morning).  The next section from Contin to Oykel Bridge (our next possible feed point) was generally good going forest tracks, initially rolling up onto the Strathpuffer 24hr course (another good way to inflict a bit of suffering into your life – highly recommended).  The problem when you know the route but it’s a long way (Contin to Oykel Bridge is about 6 hours riding) is that your mind fast forwards and misses out massive chunks.  During one of these fast forward moments John asked me how long it was to Oykel, getting excited when we crossed Alladale river to ride along the river Carron I gleefully said “about 10 – 15 minutes”.  It wasn’t.  It’s about an hour.  John wasn’t overly pleased after 30 minutes passed and we were still not at Oykel Bridge, sorry John.  He didn’t learn either, asking me again a few days later.

We eventually arrived at Oykel Bridge, Martijn arriving a few minutes after me and John.  Unlike previous years the bar didn’t seem keen on serving any of us.  I managed to eventually get some hot food and some breakfast sandwiches to go.  John and Martijn had checked the weather and decided that a cold, wet one was due on the cards so they made the wise call of staying in the bunk house for the night.  I wasn’t, I was pressing on.  I had an idea and wanted to give it a try so said my goodbyes for the second time.

From Oykel Bridge it is the start of the northern loop.  Psychologically it feels the most daunting to me, going into a very remove part of a very remote place.  You need to be in good physical and mental shape to get through this, to me it’s the crux of the ride.  I was, to say the least, very determined to finish this year after my race ending bovine incident in 2018.  My friends at work still haven’t let me forget it yet.  This is why I pressed on, I didn’t want to give myself a way out.

Riding up the road from Rosehall I was feeling focused.  My plan was to continue through the night to arrive at Drumbeg stores the following morning.  I knew the weather wasn’t great so carrying on through the night would be favourable.  My plan seemed logical in my head until I caught up with Jenny Graham.  Jenny was having a torrid time with her bike.  She’d had multiple tyre issues and was pushing up the road over to Loch Shin.  We had a little chat.  During the conversation I mentioned that I couldn’t remember if there were any rivers to cross on the northern loop (I’d had enough of river crossing by this point).  Jenny reminded me of the big one under Creagan Meall Horn, just before a vertical ATV track.  My plan instantly changed.  I didn’t want to cross any rivers in the dark of the night especially one like that.  I said my farewells knowing Jenny would be fine as the down hill beckoned.  I went past 2 Argo’s with covers on them and pondered about using one as a tent for the night but deciding I would press on, Jenny apparently used one to sort her tyre out.

Descending the tarmac to Loch Shim, trying to convince the deer to run away from me, rather than trying to take me out, I decided to find somewhere to bed down.  I got to the power station and found shelter nestled in between the walls of the building.  No roof but at least I was sheltered from the wind.  I rolled out my wet bivvy gear, consisting of a summer quilt and a thin primaloft jacket and slipped into my bed (after removing some of my wet clothes).  Lay there shaking I checked my phone.  I had signal and a message from my mate Giacomo, before I’d finished reading the message I had a phone call from him.  He answered, “are you alright”, I said “yeah, just surprised you’re calling”.  It took a few minutes for me to understand drunk Giacomo hadn’t called me, I’d called him.  It was good to speak with him.  After that I lay in my wet bivvy bag shaking profusely.  I was cold, very cold.